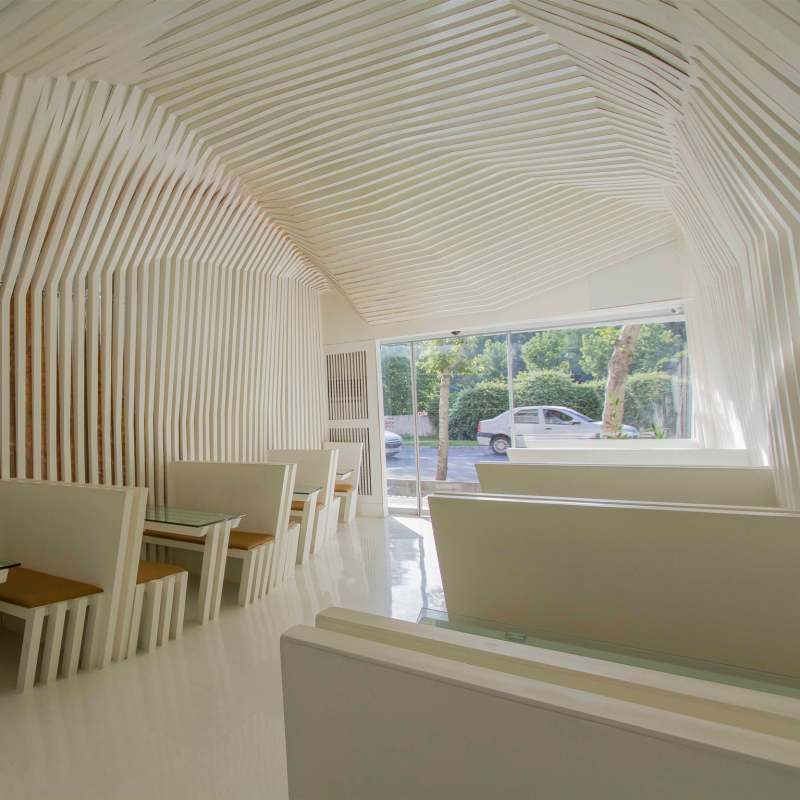 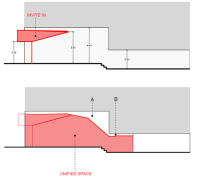 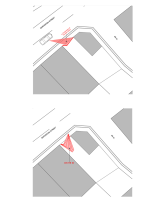 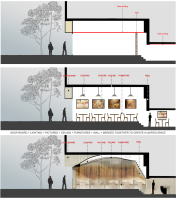 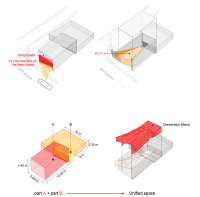 This project is located in a one way street with a main urban access in Tehran. Which is in fact,  an interior design reconstruction of a store in a way to make a new definition of a brand new restaurant.

Another goal was to creat various prespectives in exterior and interior angles concerning the mass, light and the color of the project.

According to the goals mentioned above, the technique of the design comes from two associated meshes.

One of the main proposes in designing this project was to creat a new united space between the outside and inside of the store, so the continuous and constant form of the the design can define all internal and external elements of the plan (like shop board, lighting, ceiling, walls, funiture and inside boards).

The meshes of the project are designed and proposed based on the actual condition of the building.In geomatirical forming of the project, considering that the restaurant was designed in two levels with different heights, we tried to intgrate and merge them together. The form of the project could visually invite the crossing people of the adjacent one way street according to the one direction motion of the cars. After attracting the people to the main hall of the restaurant, they will be leaded to the other part of the restaurant, including the ordering counter and the kitchen.

Considering the mentioned goals, instead of composing seperate different elements for the project, we tried to merge an integrated method that can be applied to all elements of the restaurant. As first step, we assumed furniture, tableaus, lightening, ceiling, walls, electrical & mechanical equiments and shop board as designing elements; as second step we applied a method that could create all of them.

The followed idea in transforming surfaces was to interwined strips looks for a quality that can exchange different elements to each other and simultaneously can creat an integrated totality.

Instead of setting pictures, graphics or lights on the walls or furnish the space separatly from each other  in this restaurant, we associated all elements in order to achieve an integrated space.

These strips define each designing elements alternatively so we could create the space through dividing these two meshes.

There are some abstract images with warm (Autumn) colors on the strips of Mesh A that defines colors and furniture.

These colors are faded in a white theme regarding to the 3D geometry of the design. The created colors between the strips causes specific variation and feelings from different perspectives so that gives a specific identity to each seat.

We used low consumption SMD lights that are installed behind the strips of Mesh of part B which defines the lightening. Consedering the geometry of meshes A and B and installed colors among lights, various perspectives are conceived among walking or sitting positions.

We also used metal structure as the material to shape each strip, and then panels were screwed over them. Coverage of the floor and the strips are epoxy color which has long life durability and easy cleanable.

In constructing this project regarding to the limited facilities and budget of the client we creat an executive pattern. We printed the components of the project in real scale on a long banner to give an accurate model of profiles to the constructor. This technique reduced the costs. An economic method was using stripped SMD lights which were available in market.

In fact, we tried to create a specific style for the first branch of this restautrant according to the existing facilities in our country and of the contractors. Considering that the budget of the client was very effective in modeling and designing the structure of this concept. 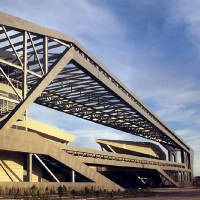 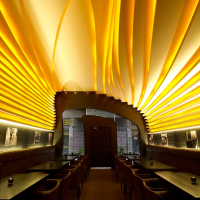 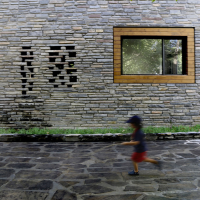 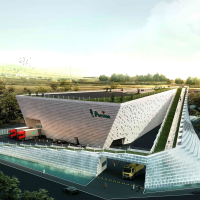 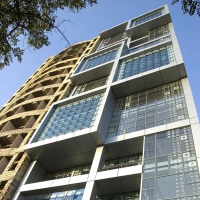 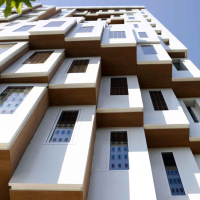 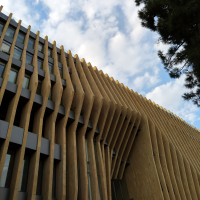 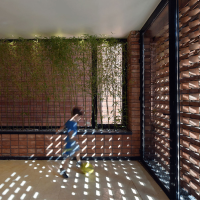 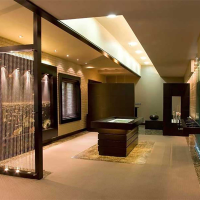 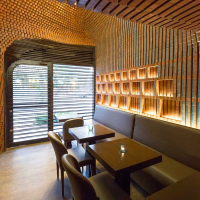 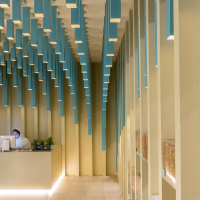 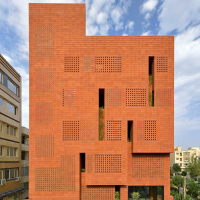